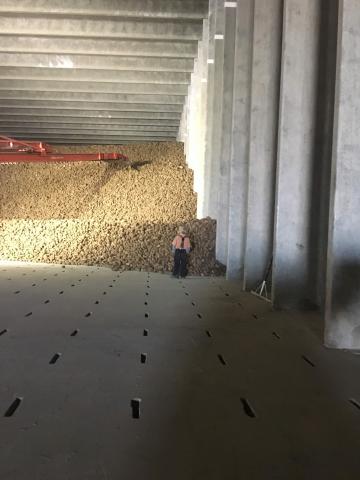 Washington State - a melting pot of diversity. Not only with people but within agriculture as well. Divided into two drastically different landscapes by the Cascade Mountain Range. The West side known for lush Evergreen trees, Seattle, and the pacific coast range - contributes to Washington's 300+ commodity crops with its well-known Berries, Seafood & Specialty Vegetables. The East side with a more open, arid landscape is known famously within the world of agriculture for its rolling hills of wheat, barley, oats & legumes, not to mention Ag- Focused Washington State University … and  right in the middle you will find an area called the Columbia Basin.

In 1931, The “Basin”, an area bordering the Yakima Valley, stretching through the city of Ellensburg onward across Adams and Franklin counties felt the weight of the Great Depression and mother nature's wrath. It was primarily desolate, barren acres where many farmers had been brought to their knees by the scarcity of water availability and the landscape's harshness. The onset of drought exposed over plowed farm ground causing this area catastrophic loss from erosion and windstorms that growers could not hide from. Their land literally blew away in front of their eyes.

After what was dubbed the “Dirty Thirties”, The Columbia Basin began to recover. Little by little the ground that was once thought of as lacking in agricultural opportunity turned around. With the installation of dams along the mighty Columbia River and with the government implementing the Soil Conservation Act in 1935, a  program(s) created to teach farmers new, innovative farming practices that would make their soils less susceptible to wind and water erosion.

Now a flourishing and progressive potato, onion, hay, sugar beets, cattle, corn & carrot Ag-Zone for Washington State. The social and economic impacts on these farming communities during the great depression still left such a lasting imprint on the landscape and its people. Coinciding with the disruption of the Covid-19 national shutdowns of restaurants, schools, fast food, international markets etc., the devastation is being felt all over again. These growers are suffering dramatic losses of commercial and local contracts they count on to make million + dollar payments on leased farm ground, equipment, fuel, fertilizer, and seed.

The economic impact of the COVID-19 shutdown is causing many of the growers in Washington’s Basin to plow under considerable amounts of their 2020 crop of potatoes (millions of pounds) which makes up 20% of the nation’s potato production, along with other perishable commodities (like unions) rather than have them harvested as usual, wasting fuel and employment pay or even just “waiting it out”, they are keeping their combines off and turning their tractors on, hooking up plows and discs to put back into the ground what they patiently seeded months ago.

Though the outcome of this year’s Columbia Basin food chain crisis is out of their hands, the growers and ranchers live on with an unbreakable spirit as they plan for next year’s harvest hoping it will be better than the last. Giving thousands of pounds of potatoes and onions, meat, and dairy products when and where they can be accepted,  will never come close to the millions of pounds still sitting in packing sheds and the crops that have yet to be harvested.

For more telling stories on the Washington State Food Crisis please visit other informational articles and videos at: