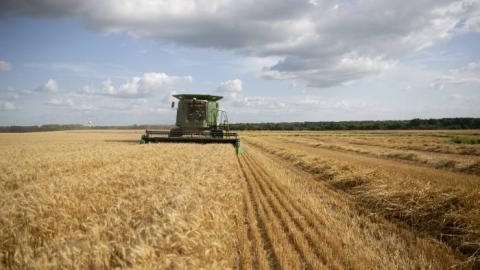 Farming and agriculture were recently named Gallup Inc.’s most respected profession, a first in the poll’s twenty-year history. Gallup, an international polling and consulting company, polled Americans this summer on their overall view of several business sectors. Respondents were asked whether their overall view of a business sector was very positive, somewhat positive, neutral, somewhat negative, or very negative.

Overall, food was top-of-mind for respondents who ranked farming and agriculture first, followed by the grocery industry and restaurants. Gallup reported that “the public is expressing greater appreciation for the work of…industries that are critical to people’s well-being.” Many farmers believe that the increased appreciation for the food sectors reflects a healthy eating movement as people want to be healthier and subsequently want to know where their food comes from and how it is produced.

This year’s rankings reflect remarkable changes in the ratings of six industries, three of which deliver vital goods and services to Americans during the pandemic. Farming, health care, and pharmaceuticals all rated more positively this year than in 2019. Farming and agriculture already ranked among the top-rated industries but moved to number one thanks to an 11% increase in its positive rating. The health care industry advanced from third lowest to near the middle of the pack, the first time in the poll’s history that a majority of Americans rated health care positively.

Given the challenges of 2020, consumers are recognizing now more than ever the importance of the food supply chain. Farming, one of the world’s oldest occupations, has persevered despite a pandemic, catastrophic weather, and economic woes.