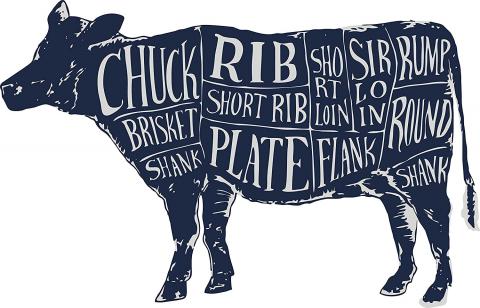 USDA analysts believed that 2020 would be a big year for America’s meat industry with record-setting red meat and poultry production. Economic growth and low unemployment were projected to boost the demand for animal protein, but then came COVID-19. Farms were packed plum full of animals raised for meat production, but the virus had made it increasingly hard to turn those animals into store-ready packs of ground beef or T-bone steaks.

Meat processing companies around the country were forced to pause operations at several key plants as workers in extremely tight quarters were increasingly testing positive for COVID-19.  Experts started warning of rising costs and less variety at the grocery store; ultimately, a shortage on several essential items such as ground beef and toilet paper ensued.

The beef shortage caused many consumers to question the new cuts they were seeing pop up in their grocery stores, but these cuts have actually been around for quite some time and are becoming increasingly popular with chefs due to their reasonable cost and flavorful eating experience. Meat processing is changing as the American family has grown smaller over the years; they are no longer having large meals together and many families are eating out regularly. Processors are breaking down cuts like the chuck roast into mid-priced flat iron steaks and round steaks into smaller flank steaks that can be used for fajitas.

Local processors may not advertise these ‘new’ cuts for standard processing, but it is just a matter of asking and paying for it. Previously, retailers could not get much movement on these newer cuts, but the pandemic and subsequent meat shortage forced consumers into trying new things. Enhancing the value of cuts from parts such as the chuck and round will help increase the overall value of meat, which has the potential to add to the value of live cattle.