WASHINGTON - THE DARK HORSE IN THE POTATO INDUSTRY 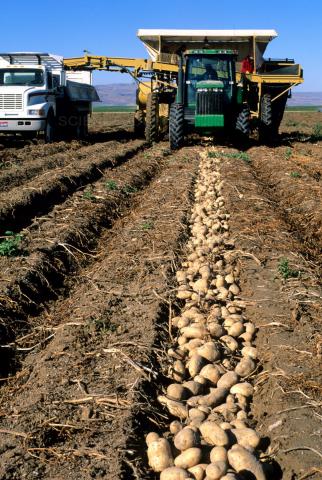 Although Washington ranks second in the nation behind Idaho in potato production, many people would be surprised to learn that Washington ranks first in yield per acre.  The rich volcanic soil, long growing season, availability of water and climatic conditions in Washington State combine to produce the world’s highest potato yield per acre.  Growers harvest an average of 30 tons per acre, twice as much as the national average in the United States.

Ninety percent of Washington potatoes are processed, mostly into frozen french fries.  Potatoes are primarily grown in Eastern Washington and the Skagit Valley.  The lack of sufficient rainfall in eastern Washington was resolved with the development of the Columbia Basin Irrigation Project in the 1940s, which is serviced by the Grand Coulee Dam on the Columbia River.  In the Skagit Valley growing region, between Seattle and the Canadian border, the mild marine climate and rich soil create perfect conditions for red, white and blue potatoes.

More than half of Washington’s annual harvest is exported overseas because of its proximity to Asia.  Federal agriculture officials announced in February 2020 that they had reached an agreement to export U.S. potatoes to China for processing, a deal which is expected to add about $20 million worth of exports per year.  Producers have previously shipped frozen potatoes to China but have been working for years to crack into the chipping-potato market.  Chipping potatoes are specifically engineered to meet the needs of potato chip makers as their low sugar levels allow them to fry up to a nice, white, crispy chip.  The demand for processed potato products is expected to increase as China’s middle class grows.

China’s production of fresh potatoes has been declining in recent years due to rising labor costs, limited mechanization, storage challenges, and the lack of new potato varieties.  Many potato processing facilities are in Northern China, where most of the country’s production is concentrated.  Most potatoes grown in this region are harvested in the fall, with limited supplies available from March to August, which has caused shortages that force some processors to shut down for months at a time.

Experts believe that an important first step in building a market for U.S. chipping potatoes is technical training for Chinese manufacturers.  The training could focus on the cooking and processing characteristics of different U.S. chipping potato varieties.  In addition, it is also recommended that industry officials work with local chip makers to develop flavors and recipes that bring out the taste profile and texture of U.S. chipping potatoes.

ATG has several clients ready to make cash offers for irrigated farms in the Western United States.  Initial consultations are fully confidential and are at no cost to you.  To learn more about us and what we can do for you, please contact us today!