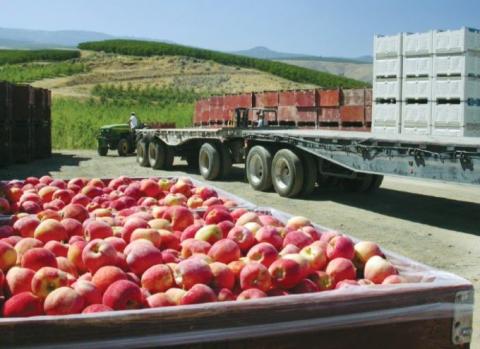 Throughout Washington State agricultural products that should be on their way to Europe and Asia via container ships are instead at a standstill.  Demand is strong but COVID-19 has unexpectedly affected the global shipping market in a way that experts did not anticipate.

When the pandemic began last spring, Americans turned to Amazon and other online retailers which in turn sparked a surge in imports from Asia.  West Coast ports were already overwhelmed, ships often sat for days waiting to unload, and these bottlenecks created major delays for exporters in Seattle and Tacoma who were waiting to load their goods for the return trip to Asia.  At the same time, the increased demand for containers allowed shippers to charge more per eastbound load.  Carriers quickly realized that it was more profitable for them to quickly send empty ships to Asia to reload instead of waiting several days for U.S. exporters to refill containers with agricultural products and other low-value products.

The global trade system was already unbalanced before the pandemic but is now so lopsided that entire sectors are at a virtual standstill.  In Eastern Washington, with no cargo space available for apples destined for Asia, truck drivers who would normally haul the fruit from warehouses to shipping ports are out of work.  In just a few short months growers will begin preparing for this year’s harvest, even though last year’s crop is still unsold.  Foreign buyers are turning to other countries to satisfy their orders leaving growers worried that this temporary problem may lead to a permanent loss in market share.

Farmers and exporters have little leverage in a shipping business that is largely dominated by just a handful of foreign-owned firms.  Instead, legislators are asking the federal government to pressure shipping companies to make room for American exports on westbound ships.  They believe that the threat of federal action or a congressional inquiry could ultimately force ships to stay in U.S. ports long enough to reload cargo containers.