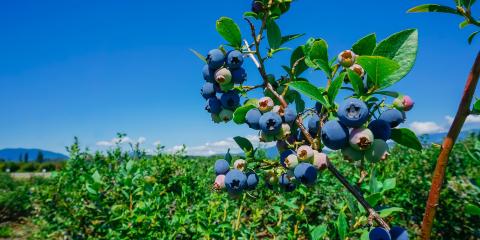 According to The Blueberry Coalition for Progress and Health, U.S. per capita consumption of blueberries has experienced a more than 300% increase since 2005.  Accordingly, blueberry production has increased fivefold in the past 12 years, according to statistics from the U.S. Department of Agriculture.  The increased production in Eastern Washington has led to an extension of early season availability of blueberries and with the use of controlled atmosphere storage, growers can ship well into October.

Experts believe that the demand for both fresh and processed blueberries will remain high as the industry continues to innovate with technology, new retail opportunities and exports.  Consumers are increasing their preference toward these types of superfruits containing high levels of antioxidants and are also increasing their demand for organic options at the supermarket.  Eastern Washington lends itself well to organic production because of its ample irrigation water supply, dry climate, low pest pressure and relatively few crop diseases.  The Philippines and China have both recently opened their markets to fresh U.S. blueberries due to efforts the local industry has been working on for 20 years.

ATG has available for acquisition an irrigated farm asset in Eastern Washington State approximately 30 miles East of Yakima, WA in Grant County.  This area of the state is known as a prime location for growing permanent crops including orchards, berries and vineyards and this type of crop is likely the highest and best use for this asset with its abundant and reliable water source.  For more information CLICK HERE