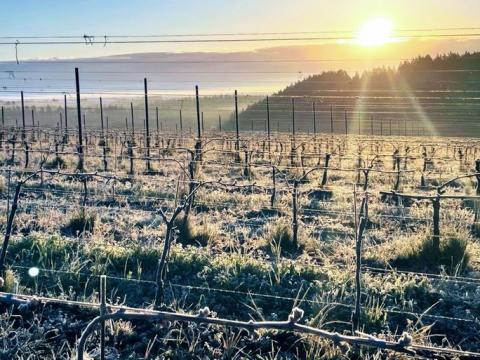 Oregon winemakers are assessing the damage after a severe late frost struck the Willamette Valley region. The week of April 10 saw record-low temperatures just as vineyards in Chehalem Mountains and Yamhill-Carlton were starting budbreak.

Frost is not uncommon in Oregon, but it typically strikes earlier in the season when the vines are still dormant. As the grape buds ‘awaken’ and emerge from their winter dormancy, they become extremely vulnerable to frost damage which will shunt their growth.

Some growers believe that over half of the Willamette Valley’s crop will be lost, but no one will know until daytime temperatures rise to a consistent 70° F for several days which will ‘jumpstart’ vine growth and reveal which buds have been damaged.

In Southern Oregon, vineyard growers were able to mitigate damage by using wind machines and overhead sprinklers. The sprinklers encase grape buds in a protective coating of ice, which keeps the water inside the bud’s tissues near or slightly above freezing.

THE ANATOMY OF A GRAPE BUD

A grape bud is comprised of three smaller sections known as the primary, secondary, and tertiary buds. The primary bud contains a shoot with flower clusters that produce grapes during the growing season. The smaller, secondary bud will typically develop if there is damage to the primary bud.

The secondary bud’s biggest drawback is it has fewer flowers per cluster and produces 30-50% less fruit than the primary bud. Relying on the secondary bud can also delay harvest for approximately two weeks. If the secondary bud is damaged as well, the tertiary bud, which produces little to no fruit, will bloom.

Only time will tell how much of the Willamette Valley’s crop will be lost to this late-spring frost, but industry experts want consumers to know that quantity, not quality, will ultimately be impacted. “Since frost impact is very site-specific, not all vineyards were impacted,” said Jessica Mozeico, Chair of the Board of Directors for the Willamette Valley Wineries Association.