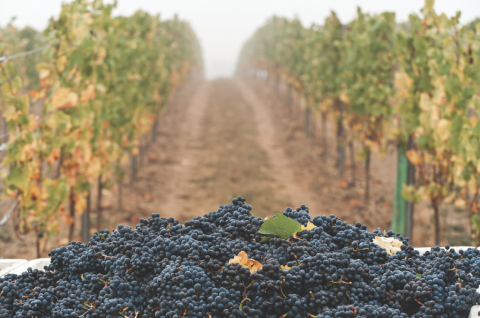 Winegrowers in Oregon’s Willamette Valley battled Mother Nature’s numerous hurdles this growing season and early indications are that the 2022 vintage will be a ‘classic Oregon vintage.’ A severe late-season frost in April led growers to estimate that over half of the Willamette Valley’s crop could be lost. Furthermore, a cool, wet spring delayed vine growth by two to four weeks, leading growers to speculate that the grapes may not develop and mature before harvest.

Ultimately, Oregon’s surprisingly hot temperatures in July and August allowed the grapes to ripen and the fall rains held until late October. Rain is problematic for Oregon winegrowers; too much at the wrong time can result in diseased fruit, split berries, or diluted flowers. Instead, a long-lasting heat dome settled over the Western United States and growers experienced a warmer, dryer September and October.

The heat dome blocked the cool Canadian jet stream from the Pacific Northwest and pushed it southeast instead. Rare mid-October snow fell in the upper Midwest and the Gulf Coast and western Florida Panhandle were under freeze warnings. Meanwhile, the extreme heat stressed the power grid in much of California as residents saw triple digits and record-high nighttime lows.

HOW DID CALIFORNIA FARE?

For many California wine regions, it was a tale of two harvests, as the early fall heat dome divided harvest into two pickings. On the North Coast extended heat beginning in late August accelerated harvest and reduced yields for some varieties. Some appellations, including Napa Valley, started harvest up to a month earlier than average and others, such as Paso Robles, experienced an extended harvest. In certain instances, the heat wave caused vines to shut down to protect themselves, thus delaying the ripening process. Blending will be important for the 2022 vintage as winemakers look to balance their early and late picks.